Why Attack The Wrist? 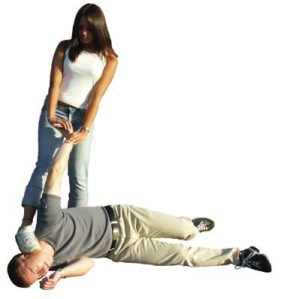 In a real life self defense situation you need to deal with the threat as quickly and efficiently as possible; this is even more the case if there are multiple opponents and only one of yourself. Instead of trying to fight your adversary standing up, this technique allows you to take the fight to them, and to the ground. This can be extremely useful if an attacker is unskilled and unfamiliar with fighting from the ground. But also you average person probably has a better chance standing up fighting you rather than from his back on the ground anyway.

Attacking the wrist for a take down is a very smart thing to do. It attacks one of the attacker’s very weak joints so resisting is not really an option. Also this technique’s success is not affected by the size of the opponent you are facing, again because it attacks a small joint.

For this scenario lets assume that the attacker makes the first move and reaches out to grab or strike you with his fist. Catching a strike to secure his hand might be difficult and require luck or very good timing. But if the attacker is simply grabbing your shirt, this technique would work wonders.

Lets assume that the attacker has is right hand on your chest. To start to release his grip, you first grab his hand with both of yours. Then in a twisting motion, pin his hand to your chest turn your upper body to the right to break his grip. Then you reverse the twisting motion to turn his hand backwards and gain some control over him. Because of the nature of this grip on his hand you can essentially use his hand like reigns to control where his body goes.

Now, The Take Down

Using the new reigns on your opponent, you move his arm in a circular motion, over and slightly outwards, This shifts his upper body out from over the top of his legs, making him very unstable. The motion is not entirely obvious at first but after some practice one begins to realize how to control an opponent with this wrist lock.  Now You need to move through the opponent to knock him to the ground. You step through the opponent, with your left leg, to knock him back and further.

You= also use your right elbow as another point of contact to bring the opponent down. It is not a true muay thai style elbow or anything, more of you striking with the point of your elbow as you move through the attacker. But it is a simple, quick, and decisive blow to his chest/solar plexus that will give you the extra push you need to complete the take down.

There are some variations of this take down that require a little more finesse and experience, but that also means they are more likely to fail. The simplicity of this attack is what really makes it great for a self defense situation. Also once you get your opponent to the ground, you are in a standing position over him. This is extremely beneficial, especially in a self defense situation because it gives you almost complete superiority in the fight as long as he stay in that position.